I played Atelier Shallie a while ago now, but I wanted to make a short post for it because I really enojoyed it. I’d say it’s the best main-series game since Meruru, and I think it was better than Ayesha overall. 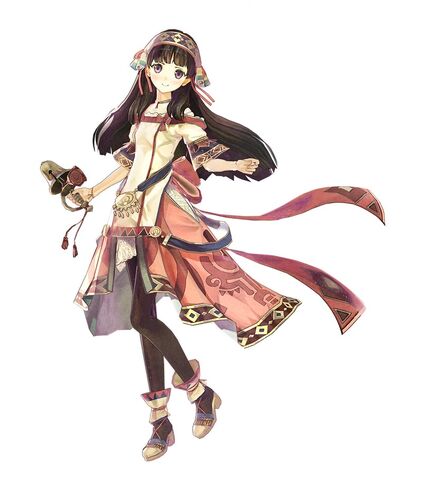 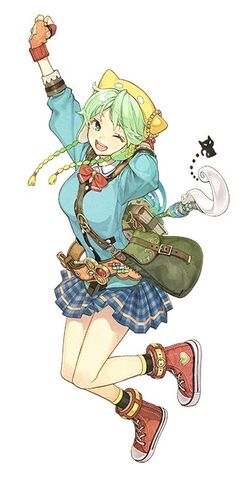 I LOVELOVELOVE Shallistera’s design! They FINALLY gave her tights and they are perfect, her whole costume is gorgeous. I love the colors and the bell motif and the hime cut and everything. Sadly for some reason after Eska & Lodgy figures stopped getting produced, but I would kill for a Shallistera fig in this pose. I actually also really like Shallotte’s design; despite the skirt the game isn’t fanservicey about it and it’s nice to see a fun design from the team in an atypical style. I think the two do a good job of communicating ‘serious country girl’ and ‘high-energy city girl.’ A+++ for character design this game.

You can choose to play from the prespective of either character, and I haven’t gotten around to a Shallotte playthrough yet, but a) this is so much better when they’re both women, they get actual plotlines and b) I thought the game did a good job of balancing between shared and individual scenes and plots.

Shallistera’s story starts in a small village on the edge of the ever-growing Dusk Sea, a huge, expanding desert no one knows the source of. The desertification has reached her village, and Shallie is a young village chieftan who decides the drought is dire enough that she needs to go personally to find out how to help her people. She, her bodyguard, and a shipwright journey to Stellard, an oasis city on the other side of the desert. There, their ship crashes, and they have to silmultaneously gain support and materials for fixing it and find the secret to Stellard’s water supply.

I also really liked all of Shallistera’s endings, which involve her growing into her role as leader and returning to save her village. I was worried the ‘true ending’ would involve her staying with all her new friends, but it actually involves her returning home to help her people, and her dedication to her responsibillities was really admirable and a nice plotline to see for a teenage girl character.

The game has some nice themes about conservationism and environmentalism, and unlike Ayesha, actually has a complete plot that fully resolves without major threads hanging, which the series has struggled with in the Dusk trilogy. Speaking of Ayesha, I was glad to see Keithgriff back, and glad to hear he and Ayesha were still work partners; Ayesha’s apprenticeship with him is one of my favorite things from this series because a totally platonic old man-young woman apprenticeship is so unusual.

You may notice there is no complaining here, and that’s because I really don’t have any. All the fanservice in the entire game was confined to one three-minutes ‘let’s randomly strut in bathing suits scene’ and you know what, I’m okay with doing it that way. Sure, it was a gratuitous Big-Lipped Alligator Moment, but it’s a billion times better to have it be one obviously over-the-top cutscene I can ignore than to have it peppered through the whole game. I wish more games did it this way. Also, this series is not light on bishounen, so the game overall managed to feel pretty egalitarian.

I also noticed that the game brought Eska back as an NPC but not Lodgy, thus in my mind proving again that the fans of this series are largely women, and that they also thought he was a dick. Eska is stupid but I’m fine with her being relegated to shopkeeper NPC. I continue to have the impression that the dev knows this game is big with women and really doesn’t want it to be, but that’s all media in the US, so whatever.

I also thought the crafting mechanics were particularly good this game, as was the time element. This was a very strong one for gameplay on top of everything else.

Anyway, check this one out if you enjoyed Ayesha but were ehhh about the other games in the series. This also stands alone well enough that I’d call it a general go-play if you’re into crafting RPGs. (Though I feel remiss saying that without saying you really should start with Rorona. It’s actually the tenth (fifteenth?) anniversary of Arland this year, so the whole trilogy is getting rereleases and updates — it’s a good time to get into them!)