Atelier Sophie is a boring game piloted meanderingly by a bland, nothing protagonist and lacking some of the major gameplay functions that make the series interesting. Everything about it feels phoned in, from the character design to the weird clock mechanics. It does have some good side characters, though. 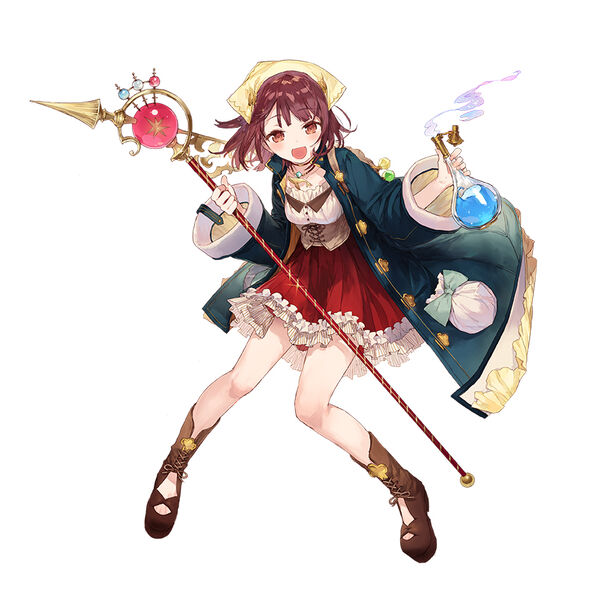 For a series with such elaborate, colorful costuming, this is an outfit so bland that it feels bizarre. It’s just a plain dress and a green overcoat. What was going on here? Was this a recycled side character design from a previous game? Compare that to Ayesha’s gorgeous rainbow hemline, or Meruru’s yellow bodice and white bloomers. The game even knows it’s a terrible outfit, because about halfway through you get to switch into a less terrible one (though it clashes horribly with Sophie’s hair color. Fuck knows what the character design team was on this game).

Sophie herself is utterly blank. She is nothing. She has no character traits, no motivation, no personality, nothing.The writers seemed unable to come up with a motivation for her more elaborate than ‘use alchemy’ (compare Totori’s “find mother” or Shallie’s “save village”). I often felt like I had no idea what to do in this game, not in the discreet plot event way, but in the existential, ‘why am I even here’ way.

And this ties into the stripped-down gameplay. There are no longer multiple endings. Character interactions don’t matter, and character events wait for you to trigger. There is no time limit, and the nominally existent date system doesn’t matter at all. Even when there’s supposedly an evil alchemist actively destroying the world, you could take as much time as you need to deal with him and nothing is affected. Nothing matters. I don’t even know why the player is there.

Weirdly, menu functionality has been stripped as well. You can’t search for items by trait, which is a nightmare, or sort by category, or see the category of the item from the synth menu, or basically anything. You constantly have to swap between synth and encyclopedia to complete quests, and it’s miserable.

The plot, as it were, is that Sophie finds an old book of her grandma’s that turns out to have a soul bound to it, and she has to free the soul. This isn’t a bad setup, but it completely lacks urgency and, apparently, can all be accomplished without Sophie ever leaving the confines of her hometown. The trapped spirit seems happy and seems to be coping fine Sophie basically helps it in her spare time. This is not an exciting way to present the plot.

As I said, I did genuinely enjoy some of the side plots, especially Oskar’s. I also thought the game handled Pamela surprisingly well, and Julio and Leon also had nice stories. I can also say that the game wasn’t plagued by dropped plot threads and unanswered questions the way all the Dusk games were, so that’s good, I guess?

Oh, but this is weird: the game brings back Logy, but retcons him into a completely different person. I guess everyone else thought he was as much of a dick as I did, because not only is he now Mr Mellow Helpful, he’s been retconned into a blacksmith — he’s explitcitly not an alchemist or adventurer anymore. It’s really strange. IDK if someone on the staff likes him and resented a negative reaction or what. Maybe it was just a character model getting recycled as a cost-saving measure.

So yeah, this was offensively mediocre and incredibly boring. There was apparently an (understandable) fan uproar about how pointless everything was, because they made a point of saying the time limit was coming back for the recent Arland 4 announcement. I hope this isn’t indicative of how the series is going to get handled going forward, because it was just 100% phoned in, top to bottom.