So yes, I did see this movie! It is not the glory of the book, but it was far closer than I had any hopes of it being (so many women! so much biology!). The changes it made seemed to be in service of making a story that would work as a movie, and I think it succeeded at that task (I quite like its decision to reframe the situation into something more focused on self-destructive behaviors, as it gives a nice overarching theme). It’s also got some lovely visuals. Overall, would recommend!

It is, however, a much simpler story, the sort of story where at various points a character will say, “What’s going on here is…” and we can take it at face value. END_OF_DOCUMENT_TOKEN_TO_BE_REPLACED

So, personal story time, DQ readers: I’m simultaneously fascinated by and terrified of death. Not of the physical act of dying in itself (although that also disturbs and intrigues me), but of the idea that once I’m dead, that’s it, my consciousness – everything that makes up who I am – will be gone. I’m actually a bit jealous of more spiritual people: they know what will happen to them in the afterlife, while I only have this vague hope my loved ones and I will continue to exist in some way that’s still discernible as us (not just in a vague “Oh, you’ll still exist, only without any sense of self”, for example).

This isn’t just me being candid. This fear of mine is partly why The Return of the Living Dead is one of my favourite movies, even as it’s also one of the few that has genuinely scared or disturbed me even as an adult. (Or perhaps it’s the other way around – maybe my fear can be traced to having watched this movie as a child? I remember taking a long time to fall asleep that night.) So, this being October, let me see if I can’t spread some of that around, eh?

END_OF_DOCUMENT_TOKEN_TO_BE_REPLACED

Hello, everyone! Sorry for not posting anything lately, but you know how life goes sometimes (and how it will keep on going for the foreseeable future, unfortunately). But I’ve missed writing for DQ, so much I even considered writing a recommendation post for assorted “Teenage Mutant Ninja Turtles” media, especially the first two live-action movies – they both just ooze* so much personality! -, but those aren’t that interesting, academically speaking.

Instead, I’m going to talk about the third “The Gamers” movie, The Gamers: Hands of Fate. END_OF_DOCUMENT_TOKEN_TO_BE_REPLACED

So, Mad Max: Fury Road seems to have been a hit. I’m very surprised – I’m a big fan of the original trilogy (well, more of the two first movies, but even the third one has its moments), but I didn’t think a new movie over thirty years later would be so well-accepted by the audience of 2015. Of course, the joke’s on me: I had forgotten how the original movies had also been surprise hits (again, at least the first two).

END_OF_DOCUMENT_TOKEN_TO_BE_REPLACED

This won’t be a review of the movie itself. Suffice to say I enjoyed myself immensely when I watched it, even though, from an objective viewpoint, it is a weak movie. Two characters were needlessly thrown away (at least, as of this movie; maybe they’ll be brought back in some way in later ones) and there were a few scenes where Whedon’s penchant for “witty” dialogue harmed the mood of the scene, but overall, it’s like a Snickers bar – not a proper meal by any stretch of the imagination, but it does satisfy your hunger somewhat, and damned if it doesn’t taste delicious!

I’d like to talk about a specific WTH moment in the film. It is entirely possible I’m being too uncharitable with it; I’ll leave it for you guys to judge. Oh, and there will be spoilers regarding an unexpected romantic relationship between two important characters, by the way, so don’t read this if you’d prefer to see the movie first. END_OF_DOCUMENT_TOKEN_TO_BE_REPLACED

It’s nothing special, just a string of clichés tied together by the most basic of plots. It can be good for some mindless entertainment, but even then, it has some serious flaws. END_OF_DOCUMENT_TOKEN_TO_BE_REPLACED

This lived up to every claim of being a videogame in the best of ways. It was funny and exciting. It had a really great female character. It was otherwise all men. END_OF_DOCUMENT_TOKEN_TO_BE_REPLACED

I’ve been curious about Maleficent ever since it was the only trailer I saw to involve only female characters. I was also hoping it’d be full of special effects. Beyond that, I wasn’t expecting much, and the few snippets I saw of people talking about it were saying stuff how her backstory would be a woman scorned thing. Then when I looked up the movie to see it, I found it had a 50% rating on Rotten Tomatoes.

I was pleasantly surprised by what I actually saw. END_OF_DOCUMENT_TOKEN_TO_BE_REPLACED

The Host is a terrible movie. I went into it thinking that it wouldn’t be worse than the book, especially since it won’t have room for the constant filler and beatings. But it managed to find a way.

END_OF_DOCUMENT_TOKEN_TO_BE_REPLACED

The Divergent movie is exactly what you expect out of a movie – the plot is more streamlined and a lot of the poorly explained bits work better, but they had to be papered over by standard cliches, and it starts a lot stronger than it finishes. The end result is not particularly interesting. (And since the no-plant-life thing was just an artifact of bad writing and this city is covered in green, I can’t even enjoy the question of wtf happened to mess the world up so badly.) The opening sections were great and an all-around improvement, though. END_OF_DOCUMENT_TOKEN_TO_BE_REPLACED 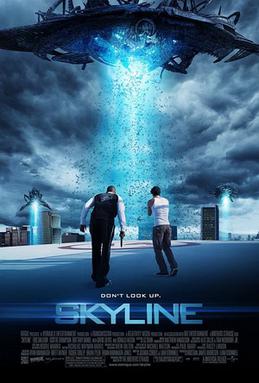 My dad watched this and decided to share it with me.

In the movie, aliens drop these big glowy things down, and if you look at them your skin and face get all black and zombie-corrupted, and you walk out the nearest window, but it goes away if you get them away from the light. After the light balls go away, the survivors head out and see these giant ships which turn out to have caught and are now sucking all the people into them. It’s at this point I began my argument that the aliens are not trying to kill us. These are alien conservationists.

END_OF_DOCUMENT_TOKEN_TO_BE_REPLACED

Well, I finally went to see Catching Fire. It’s…well, pretty much like Hunger Games was, most of the objectionable bits cut out either intentionally or because they were dross getting in the way of a streamlined tale.

Before we begin, let’s talk about the trailers at the start.

1) About guys and hustling. There were at least two female characters in it, but only in relation to men.
2) 47 samurai thing. Shouldn’t even need to explain.
3) What seemed to be a guy romcom. I think this may fail reverse bechdel depending on how liberally you interpret “about a women”, actually.
4) The thing about the guy who has no life and gets one and also the girl.
5) A female voiceover! It’s Maleficent, and involved the princess and Maleficent as the only speakers.
6) Hobbit. It’s good they added a female character, but it doesn’t change much.
7) Frankenstein (wtf) which has female characters who don’t talk to each other and are defined in relation to men and I think one of them was doing the pretty but secretly ugly monster thing.
8) More female characters talking! Lots of them, in fact! It’s Divergence, reminding us that YA may be terrible but it’s that or movies about guys having their guy problems and nothing else.

So with that in mind, I was feeling particularly favorable toward Catching Fire, and indeed, it opens with Katniss, in the woods, being herself! Then she tries to shoot a turkey only for her to think she’s shooting a person and freak out. PSTD about harming others and not just being afraid for herself! Katniss goes on to exhibit more self-loathing that’s about her and how upset she is about what she did, not about how much better than her Peeta is and how she should just die for not being good enough for him already. END_OF_DOCUMENT_TOKEN_TO_BE_REPLACED

The WWZ movie is, shockingly, not terrible, and I’d even go so far as to call it good. It bears little resemblance to the book by this point, but the book isn’t perfect. So while it’s dropped some of the good things, it’s also dropped plenty of the bad. The zombies are runners (Olympic runners at that) but they follow simple, consistent rules of behavior that can believably result in some of the more complex things we see from them, the people act like people and get lots of little characterization moments, plot points that are raised are followed up on, and the resolution is foreshadowed repeatedly throughout movie. You really wouldn’t know that it’s been rewritten a dozen or two times. Also, people are decent and work together, which is always nice to see.

It really isn’t gory either – that was probably a poor decision that angered many, but it’s also the only reason I could watch it in the theater in the first place, so I don’t mind. The couple minor jump scares it has were more than enough to terrorize me.

END_OF_DOCUMENT_TOKEN_TO_BE_REPLACED

Unfortunately, I need more time to properly chew through the next batch of Host chapters.

So, let’s talk about the new Superman and Star Trek movies.

END_OF_DOCUMENT_TOKEN_TO_BE_REPLACED

So I went to see the Hunger Games movie.

It was pretty good with some underlying issues.